Kirsten Heiberg still had a name in German film after the war. The German film industry was, however, still strongly influenced by nazism, most of its staff members had their background from the 12 years of service under Joseph Goebbels. What they were able to do, was creating melodramas with a nazi flair. Nazism was now forbidden by the allies, but few German actors, script writers and producers really reflected over or took a stand against what they had been doing in the past. They continued to make their melodramas as before.  As a result, many German films from this epoche have a certain ambiguousness about them, a feeling of loss and bitterness for having been defeated in the war, with no reflection of why this has happened. Such a film is "Furioso". Its message is that love is such a strong force that humans are willing to commit the most ruthless acts to achieve it. And the one who loses in the game of love, can die as a result of it. This is how love is, according to "Furioso". After the suicide of one of the characters, Isa (Kirsten Heiberg) says to Peter (Peter van Eyck):
«Peter, you cannot be blamed for his death more than I can - or Hilma. If there is a question of guilt at all. In that case, love as such represents guilt. One cannot love one person without doing harm to another.»

Does love still become a metaphor for politics (read:nazism)? 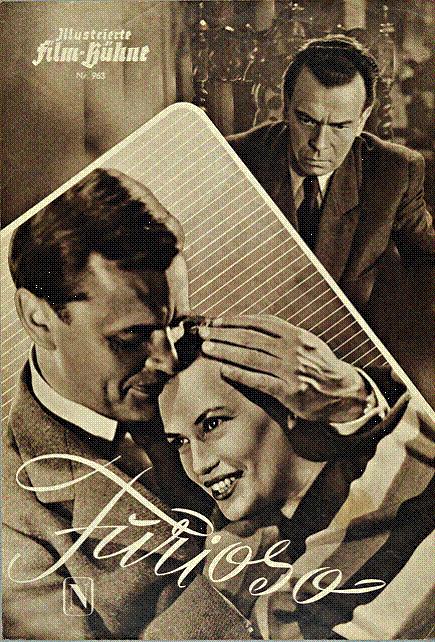